As a salesman of stainless steel products at Arcus, I often have to check a material test certificate (MTC) for a value, to see if a particular code is mentioned or whether it matches a specification. The first time I saw a MTC, it was like reading Egyptian Hieroglyphics. But after a while it became clearer and it turned out that many interesting things are summarized in a certificate. But what do all these terms mean? In this blog I want to focus on the part: Mechanical properties.

Tests can be divided into destructive and non-destructive testing. In the part ‘Mechanical Properties’ you will find the results of various destructive tests. The most often applied destructive tests on metals are the tensile test and the impact test. Why are these the most common? To find out, we first need to know something about the history of these tests.

As soon as mankind began constructing steel, one had to perform strength calculations. They soon realized a tensile test is imperative for ensuring safe, high quality material and dramatically reduce the chance of failure in the field. However, metal that passed the tensile test sometimes turned out
to break suddenly in a construction, despite the fact that the design was thought through very carefully. In the following painful process of trial and errors like the catastrophe with the Titanic (1912) and the breaking of the bridge at Hasselt (1938) it was discovered that temperature has a large influence on the mechanical properties of metal.

The technology of welding became popular at the start of the 20 th century and was applied on a large scale in the USA during WOII, mainly in shipbuilding. An epidemic of brittle fractures arose in the war. Some might say more warships sunk by brittleness, than by torpedo’s. These calamities focused attention on the fact that normally ductile mild steel can become brittle under certain conditions. Welding instead of using rivets caused an extra influence due to the heat input around the weld. After numerous studies one of the results was the necessity of an impact test to determine the toughness of steel at various temperatures.

How are these tests performed and what do they tell us?

Tensile test
In a tensile test, a sample piece (which is a standardized test bar) is placed in a tensile testing machine, and secured in two clamps. This piece is pulled apart until it breaks. The tensile force is being measured as well as the elongation. Through this test one can determine many mechanical properties. The results are summarized in a stress-strain curve as you can see below. 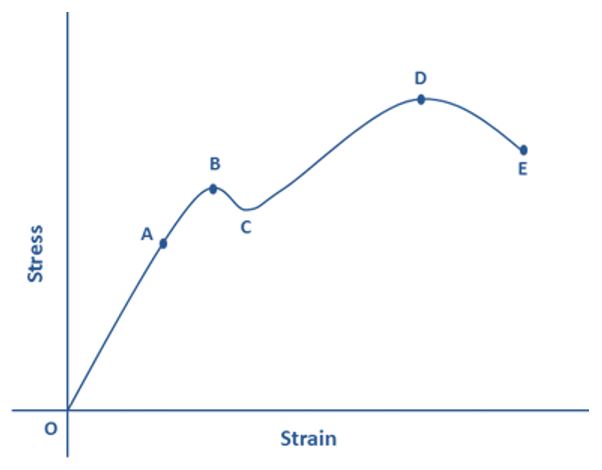 There are a few interesting points to show in this graph.
A = Proportional limit. above this point, the strain is no longer linearly dependent on the stress.
B= Elastic limit. Under this point the material is still elastic which means it is self-reversing after the force is removed. Above this point the material will begin to plastically deform, so a permanent material-change occurs.
C= Yield stress point. the stress after which material extension takes place more quickly without any increase in load.
D= Ultimate stress point. This is the point where the material cannot handle any more increase of tensile stress
E= Breaking or rupture point

Impact test
The Impact test is also known as the Charpy V-notch test, as it was developed by a Mr. Charpy in 1901. As in the tensile test, a standardized test piece is being placed in a machine. The difference is that a kind of hatchet (pendulum) is dropped from a height to impact the material. The absorbed energy of the fracture is measured which results in a value which is usually written in Joules. This test is performed at different temperatures, and as you can see in the table, temperature has a huge influence on the material properties. 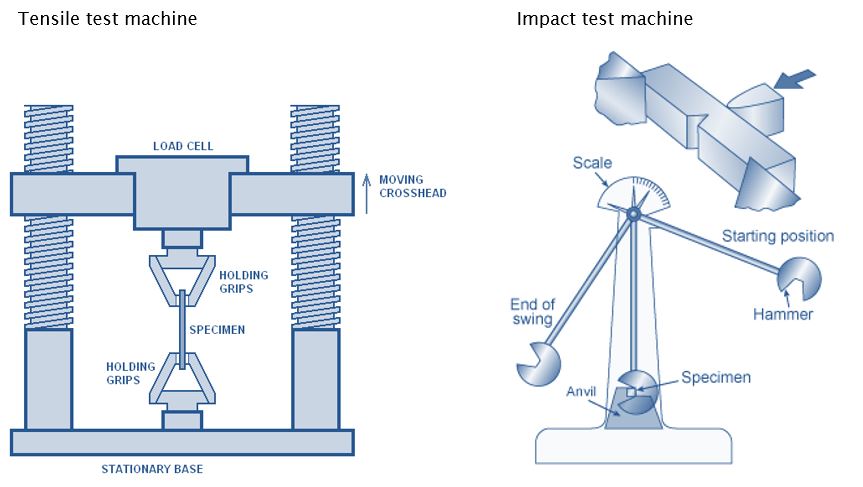 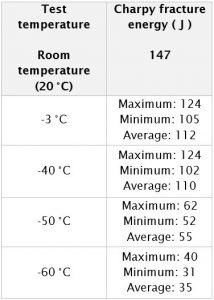 The (stainless) steel products of Arcus are well certified, in many cases even with a 3.2 certificate. We are happy to assist you if you need any info or for example an upgrade to a 3 rd party 3.2 certificate. If there are any questions left, please consult our experienced sales team for any enquiries or questions you might have. 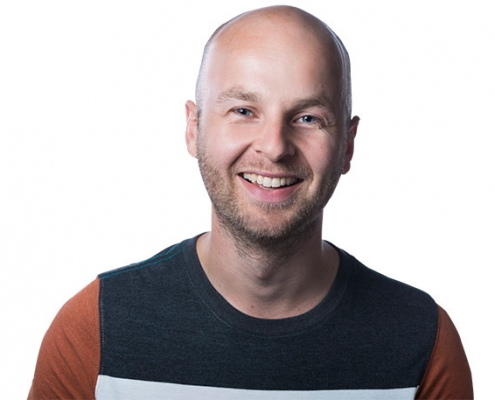